Tired of feeling like a prisoner in your own home? 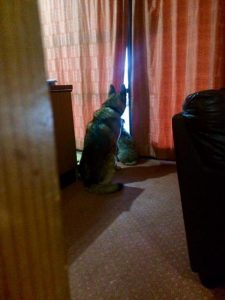 Sick of being taken by surprise at every little sight and sound?

Are you spending more and more time telling the boombox barking banshee to shut up?

Barking dogs indoors is a nightmare! I remember when I had not one… not two… but three dog’s kicking up a fuss at every sight, sound, smell and god damn leaf flying past the window.

At the time I was working round the clock, and was only ever at home late in the evenings, by which time I was ready for bed. I didn’t have time to train this out of them! But I didn’t want it to continue. What if it was pissing the neighbours off?

I didn’t want to get reported.

That’s when I decided to use some simple management and training strategies to just get me through and prevent it from getting any worse. Until I had more free time to be able to sort the issue properly.

Did you know there is a normal rate of barking, and a nuisance form?

The normal bark is a couple of woofs, before they stop and then can settle back down quickly. My German Shepherds do this, and as a guarding breed I don’t mind that.

But the nuisance form. My god, that’s the bark that echo’s constantly through the house. That’s the bark where your dog doesn’t shut up and it’s the one that makes you see red, start raising your voice and you have to do this on a daily basis, so really all of that shouting and getting in a mess ain’t solving anything. 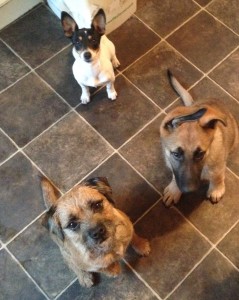 I know this is a massive problem for dog owners all across the globe, and I thought it would be really useful if I could share more about why dog’s bark indoors to be able to then help more people.

There’s more to it than just letting you know something is there.

Let me help you with this, and to make sure you don’t miss out on the free masterclass. Yes that’s right, it’s free! Click the button below to sign up and register for the link.

It’s happening on Tuesday at 7pm. It’s online, and all you have to do is log in at 6:50pm to make sure you get a space and then kick back with your brew (or bottle) and listen in! Simples!

The software I use only allows 100 spaces, so make sure you get there early to secure your space. Otherwise there isn’t a lot I can do about it.

Let’s learn how to silence your shouty sod and turn the chaos around back in to calm!

Click here to register
We use cookies to ensure that we give you the best experience on our website. If you continue to use this site we will assume that you are happy with it.Ok